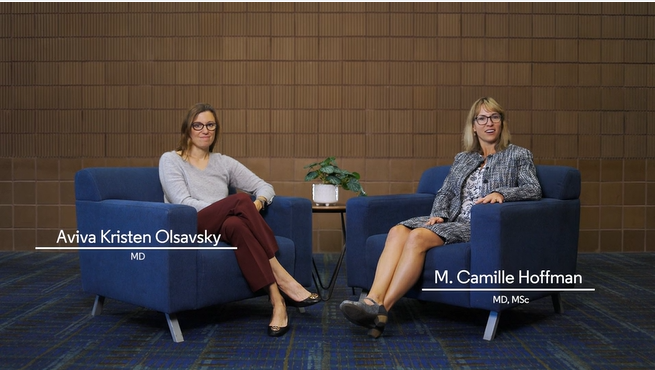 Camille Hoffman:
What do you think are new mechanisms of approach—either psychotherapeutic or pharmacotherapeutics—that might change this or help us pivot the treatment? In many cases for perinatal populations, we take a med that's been around for a long time and eventually we just start giving it to pregnant women, see what happens, hope for the best.

Aviva Olsavsky:
Right, so I mean, there are several different interventions that have been adapted. There’s one called ROSES, and it’s a virtual four-week group intervention. And it was studied in populations who were at risk for various reasons. They were either experiencing low socioeconomic status, or they were from minoritized groups. And they actually also did—I think—a study in adolescent moms. And what they found was that having these groups helped them to navigate the role change that occurs within the perinatal period. So I think it can be really helpful because it decreases isolation and it normalizes the experience of moms during that period.

Camille Hoffman:
Okay, so a couple of things to mention about North Carolina. One thing we had discussed before was that they do have one of—now several or a handful of mom/baby units—but we've talked before about one of the barriers to many patients is that there is an infant that comes attached with that patient, that mom. And we think that in settings where babies cannot be admitted, or maybe there isn’t another person to care for the baby, then that patient is not going to get the admission and care that she needs either because the admitting team doesn’t admit her for these concerns, or because she understands that she can't be admitted and have no one to care for the baby. So I know University of North Carolina, who were the lead site in the brexanolone randomized trials, has a mom/baby unit, which probably facilitated enrollment because there was a place for babies to go.

And so we're able to take that factor out of the equation for those who could or couldn't participate because of social barriers having a newborn. But I know that Samantha Meltzer Brody, who is one of the lead perinatal psychiatrists—I think she's the chair of psychiatry at UNC now—does a lot of research on sex hormone-related and genetic changes that impact postpartum depression. And so, it was a natural fit for her, I think, to do those trials because brexanolone is targeting a different pathway and mechanism, more GABAergic, more aligned with sex steroid hormones that fluctuate in the postpartum period. It is a novel idea. As with what I know about pharma in general, hopefully those data will guide future research. Future developments in this other realm and bring GABAergic, hormone-associated illnesses like postpartum depression more into the spotlight for therapy since there hasn't been a lot of shift otherwise within depression and anxiety.

Aviva Olsavsky: Yeah, I mean, the thought occurs to me as a pediatric psychiatrist too, we often say kids are not just little adults, right?

Aviva Olsavsky:
And so I would say that the same thing applies for if we're going to treat people in the postpartum period. People who have had babies in the postpartum period are not just, I mean, the same as the 70-kilogram man who has depression. So thinking about, how can we come up with treatments that kind of target some of the hormonal changes that occur—which it really is a huge change when baby is born. So maybe going where that is for the research to kind of look into mechanisms related to that. I'd be really curious about, I mean, I know oxytocin hasn't panned out in other realms, but I'd also be really curious about those sorts of mechanisms too, especially since we know it's involved in bonding, so.

Camille Hoffman:
I guess what that makes me think. One of the things that I commonly tell patients is you can eat things that a 70-year-old man cannot; eat a lot of eggs, you need all of that cholesterol to make all of the hormones for you, a placenta, a fetus. So, on the one hand, I think it's occurring to me daily how much hormonal support—with the building blocks—is important. But I didn't make that connection with mood as well. And brexanolone and GABA really, until we started, we started talking about it. So what developments do you think might help us facilitate more precise prescribing based on patient presentations?

Aviva Olsavsky:
Right, yeah. Well, I think this whole idea of personalized medicine is something that National Institutes of Health have been pushing for some time. And I think in order to have that, I mean, I think we need more biomarkers of illness, more understanding of what epigenetic changes are associated, what neural circuitry changes are associated with the different problems that people have in the postpartum period, including postpartum depression.
So I think, understanding that in more detail, because it's likely that the DSM diagnoses, although they are really important and we have a research base that is based on them, right? So you can't just throw them out, obviously, but it's likely that they don't totally go with what the mechanisms are in the brain. So, kind of understanding more the neural circuitry and beyond [inaudible 00:29:15- monoamines], but thinking actually of other neurotransmitters that could be involved.

You mentioned GABA before, GABA/glutamate balance, thinking about these types of things and understanding how they interact with the reproductive system.