Kali Cyrus, MD, MPH, assistant professor of psychiatry at Johns Hopkins School of Medicine (Washington, DC), considers the heterogeneity of stigma around major depression and how this impacts efforts to reduce it. 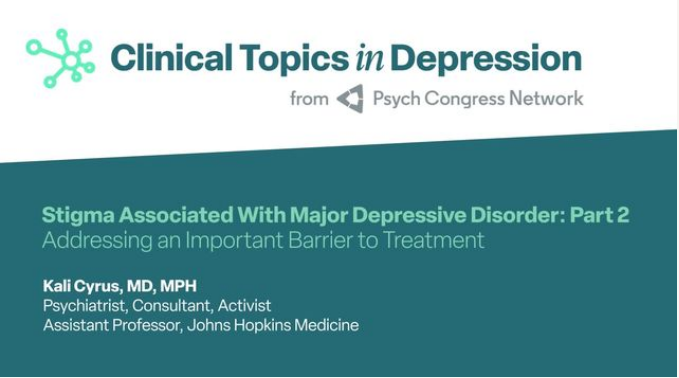 This video is part of a 2-part series on “Stigma Associated With Major Depression."
View part 1 here: https://www.clinicaltopicsdepression.com/video/stigma-associated-major-depressive-disorder-part-1

Question: Given the complexity of stigma, how do you address it in all its manifestations in different communities?

Dr Cyrus:
I think the best strategy is to meet people where they are and try to communicate in a way that they understand. And so, one way to do that is to ask them questions. And again, try not to be, if you're a medical professional, I know we tend to be a little jargony, use big words, assume people know more than they do. So I'm really saying, come at this from a beginner's ear and ask folks, "What do you know about depression? Do you know anyone in your family? What do you think it looks like?" So really asking the basic questions to encourage folks to feel comfortable to answer those questions. But you need them to be honest and tell you what they know so that you can help give them information that might help.

So my approach when I think about this, so for example, so I treat a population of mostly black and brown individuals, and LGBTQI individuals across the age span, so from 19 to 89. And what they present to me with their questions about stigma and major depression tend to vary. So if one patient who has had severe, severe depression for decades talks about how this influenced her relationship with her kids; and doesn't know anyone who's on medication, wouldn't want to tell anybody that she's on medication, doesn't want anyone to find out that she's on medication and needed a few appointments to even be comfortable with medication, even though that's why she came to me to make the appointment. And so I spent a great deal of time asking her, "What would happen if someone found out? What are you nervous about? What would happen if someone at work found out? What would happen if one of your children found out? What is the worst thing? What comes to mind when you think about what someone will think about you?"

And after answering some of those questions and finding out about a family history of schizophrenia, and how folks viewed that family member as an outcast, as really sick, as not being able to trust anything that they said, my patient did not want those same things to be attributed to her. And so, one thing I asked was like, “Let’s just try it and you’ll see. If you feel better and the way that you present to the world. And also there’s no guarantee that everyone’s going to find out that you’re taking this medication in general, but at least I think once you try it might also change your relationship to the stigma.” And I think that’s really important. And so, what I saw is that it actually did. This woman has been doing incredibly well, and this is someone who was months before thinking about harming herself.

So I think that is a great example. I also have examples of younger folks, and what commonly comes to me now is, "Well, I can smoke weed," or something like that. And from what I've heard, I think I mentioned this another question, these medications change who you are. “I don't want to get dependent on it. Am I going to have to take this for the rest of my life?" And so, I think this tells me that, at least in my patients who share things like this, that they are aware that they're presenting with some sort of symptoms that need some help. And I think that's what most people are presenting with. It's just a matter of how comfortable they are telling you what they're experiencing, especially if their thoughts are about suicide, or about self-harm, or even just passively, “Maybe I'll drive off the side of this road, but I don't really want to.” Because most people are, they find these to be really scary thoughts or family members say, "Don't think like that." Which is something that the research shows. Is that you could just get some rest or have a brighter affect, and that will cure your depression.

So, you really want to ask them what those symptoms are because they may not be thinking of MDD, and the way that you might be thinking about it and understanding the full risk. And so again, in my patients who believe that this will change who they are or that they'll be dependent, I tend to address, and again, I think that this is stigma because these are things that they've heard that dissuade them from wanting to receive a treatment that is very common, and their knowledge about how antidepressants work. So, I tend to give a little bit more education in this case about the different types of antidepressants. About the fact that you can discontinue them with professional help very slowly. The fact that not everybody is on them forever.

And my experience is that there is some that if you feel like you're numb or it changes your personality, then that's not a medication for you. But I've rarely seen that from folks; but that's definitely not something that we would want, and we can always do something else. So, I think it just requires you to be flexible and really able to let the other person make, create an environment so that the other person feels vulnerable and sharing what their concerns are, their hesitancies, and then you being able to provide information that makes them feel more comfortable about what they're doing.

And also, I think sometimes this requires going off script and really saying, "I have so many patients who get treated and helped by this, and maybe who presented in the same way that you have." Because I think folks also like to know that there are other people in the same position who may feel this way reluctantly, but have come and kind of overcame those anxieties. And so, that's also one strategy that I use. But I think again, it really varies on who the person is and you getting to know them where they are, and what their specific concerns are.

Dr Cyrus:
I'd really like to highlight the role of the pandemic, and I think changing the course of how many people feel about the stigma against major depressive disorder. And it's one of the silver linings, I'll say of the pandemic is that I think it became much more public how many people were suffering. And we were all suffering from the same thing worldwide. And I'm sure you, much like me on social media, or even in the news, were astounded by how many people publicly shared this information. And I think even before the pandemic we'd seen us splattering, I don't know that that's a word. We've seen a few celebrities come out and talk about their mental health. But since then, I mean you have Michelle Obama, you have Taraji Henson, you have Michael Phelps, you have Demi Lovato, you have a number of high-profile individuals who have shared their experience with major depressive disorder, or another mental health condition in a way that I think does help people who don't know anyone.

And that's one of the things that you see in the research, is that if you're someone who doesn't know anyone who's suffered from depression or been treated with depression, then the chances that your stigma is much stronger towards MDD. And so, in a way, even if you don't have access to some psychiatrist coming into your community and explaining everything about depression or how medications work, you might see one of these people on the television, or in your newspaper talking about their experience with it. And I think that that’s something that has really changed for the better, is that it's not something that I think so many people are keeping in a closet anymore. They're not embarrassed about anymore. And in fact, there's research that shows that individuals, at least across a period from between 1996 and 2006, and this is a study that came out in JAMA I think around last year, have reduced their feelings of stigma towards those with major depressive disorder.

And I think that's really important. Again, this is before the pandemic, so imagine how much of that stigma might have been reduced since we've gone through everything we did in the past four years. And so, while there is a lot of information out there—still a great amount of stigma—I just wanted to offer that tidbit as I guess a little kernel of hope in thinking about people's comfort, and really changing the tone of conversations and sharing how they feel because that's the first step to being able to do something about it.