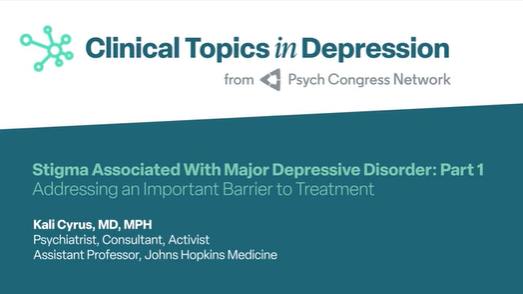 This video is part of a 2-part series on “Stigma Associated With Major Depression."
View part 2 here: https://www.clinicaltopicsdepression.com/video/stigma-associated-major-depressive-disorder-part-2

Dr Cyrus:
So, research about stigma and major depression has shown that education can influence the amount of stigma that you hold against folks who are diagnosed with depression. And if you think about that, this makes sense because in terms of health literacy, understanding where depression comes from, how we diagnose it, how we treat it, and knowing people who also have the disease makes a difference. And a lot of this is tied up in how we understand health literacy, or how you understand how all of those things—in terms of depression—are diagnosed and treated. And so, the research again has shown that folks with lower levels of education report higher levels of stigma. And so, the inverse seems to be true as a correlation to that, which is if you do provide more education about depression, and especially if you know someone who's been treated with depression, your stigma is more likely to decrease.

Question: How would you engage in community outreach to reduce stigma?

Dr Cyrus:
So, in thinking about how you engage in outreach to different communities, and this may be biracial and ethnic subgroups, by age subgroups, or even by gender. And I think that in order to communicate with people who are different from you, or live in a different place, or have a different identity than you have, you guys got to speak the same language. And so, if you don’t know how to speak the same language, you’re not from that subgroup, I think the first thing to do is to try to get on the same page and learn how to speak that language, or seek some counselor for someone who does, even if they are not experts, they may be experts in that group that you may not be an expert in. Because ideally what you're going to want to do is, make sure that you can meet them where they are.

And that means being able to ask them questions in ways they understand. And I know sometimes this is difficult for members of the health care force because we tend to use a lot of jargon and concepts that lay folks may not know because, why should they know? And that might dissuade folks from actually feeling comfortable enough to talk to you. And then you also want to be able to—once you're in conversation—to be able to continue to engage them, and break things down, or explain it to whatever level that people need.

And I think this is really important because a lot of physicians—APRNs, APAs—we have spent a lot of time in school, and that's not necessarily the case to the folks who we might be trying to understand why they have stigma against MDD, and other medical and behavioral health conditions because we have a completely different attitude that maybe we've grown accustomed to.

So, find someone from that community, if you're not so familiar with that community, and ask them a little bit about their thoughts and how they would engage with someone who's from the same place that they are, or in the same age group as they are. I'd also say check the research because the research does show, in at least in some subgroups, that there is some work there on which groups have more or less stigma against conditions like major depression. For example, younger folks—15 between 22—tend to have less stigma against MDD than older folks like baby boomers or the greatest generation. Also, found again that education, the more education that you have, the less stigma you might have against treatment of MDD versus having less education. And again, some of this might have to do with health literacy, and this is part of what you might be providing to these subgroups is some of that health literacy about what MDD is, about what treatment for MDD is and what it isn't.

But you will have to mostly be able to gain the trust, and I think respect, of someone who's different from you for them to be able to give you this information. And as we know, at least if we're thinking about the population of medical professionals or folks who have graduate degrees in this way, many of us may not look like, or come from the same background as people who may not have as much education, or may be younger, or may be in one of these subgroups.

And so, it's our job to be able to not help them feel so nervous if we're in a white coat. Let them know that we're really here to just understand what their hesitancies are, and give them information, and not going in just trying to convince them or make them feel like they don't know anything. I think the goal is to move people at least to behavioral change and to changing some of their beliefs. You really do have to meet them where they are and find out where that is. And that requires being humble, be listening and understanding, and really trying to communicate in a way that is effective and similar to the person that you're speaking with.

Question: Does the heterogeneity of stigma argue against a one-size-fits-all approach to addressing it?

Dr Cyrus:
So, as we know, stigma can appear very heterogeneously; with a complicated mix of folks, especially as how they show up with having major depressive disorder, how folks in general feel about others who have major depressive disorder, maybe doubts about treatments and even providers who administer that type of treatment, like people like me, psychiatrists. And then even the stigma that's felt by medical professionals who even treat, who treat major depressive disorder in our own stigma. And so, do you think a one-size-fits-all approach can really fit addressing stigma? I argue no. Again, like the last discussion question, I typically think if you are trying to appeal to someone who's especially different from you, if you are the subject who's trying to talk to someone about stigma, you have to be able to meet them where they are and speak their language. And so ideally, I mentioned before you would know someone from that community or subgroup who would be able to give you some insider knowledge about how folks generally feel and talk about depression. Is it something that's commonly treated where they are?

But I think if that's not possible, then the best thing to do is actually just ask folks different questions about what they've heard about depression. And I think be ready to get a bunch of different answers depending on who you're talking to. And also be ready not to judge whatever those answers are, because you can imagine that exposure to knowing people who have depression, to seeing it on television, to just hearing rumors about it, or like knowing one person who had horrible treatment. And I think about this just given how many people may not even know the difference between a psychiatrist, or a psychologist, or an APRN, or a PA. And so, there's not a lot of adequate education around these issues and who provides what type of treatment. This information is sort of guarded, I think, by the gatekeepers who are people like us who know all of this.

And it's our responsibility to try to explain this to different people to help reduce the stigma of major depression. And I think when we think about professionals and the stigma that we have, and medical professionals in general. There are a lot of questions that are asked in recertifying for your board exams, or even probably applying to a job they want to know about... Well, not a job necessarily because I think that's against the law to ask about medical conditions. But in recertifying for at least a medical degree, I am asked if I have any mental health conditions that would prohibit from me doing my job. And so, in some cases when you are having a depressive episode, you probably cannot do your job so well. Maybe you do take an extra day off, but there are a lot of folks who do not reporting this and that is stigma.

So, if we as medical professionals who help treat people with major depression feel that stigma ourselves, you can imagine what it's like when we are trying to communicate or reduce that stigma with other people. And again, this is where I come back to the research. We found that folks with more education, who are also younger, typically have less stigma about receiving treatment for major depression than those with less education, or those who are older in general. And so, I also encourage folks to find those people in the community who you think are the ones who are pointed out in research to have more favorable opinions, because we need them to go out into their communities and talk to folks about having depression and reducing the stigma.

And at least in my own practice, I'm seeing this a lot more often with my patients who—some of them are in their twenties—who talk to their parents about their experiences with depression and their parents are becoming more open to talking about how they've experienced that in the past. And I also have a number of patients who are in their fifties or older who the pandemic hit and they said, "I got to try something different” but were very resistant, very scared of medications, had heard that it makes you numb or it makes you become a different person. And it's my job to try to disabuse them of these notions and give them the knowledge that I have on my side to help them make that decision.

Because to be honest, some of these treatments do come with side effects, and it might be hard to find a good match for a psychotherapist in terms of treatment. But it doesn't mean you don't try. And I think the risk of not doing so is much worse than actually just trying to get help, and find more information with an open mind to someone who's trying to give you that information.