Dr. Edward Kaftarian, MD, a psychiatrist with a private practice and CEO of Orbit Health Telepsychiatry, discusses the challenges associated with setting treatment goals for patients with major depressive disorder. Dr. Kaftarian emphasizes the importance of establishing a clear diagnosis, educating patients and managing their expectations about the medications they are taking. 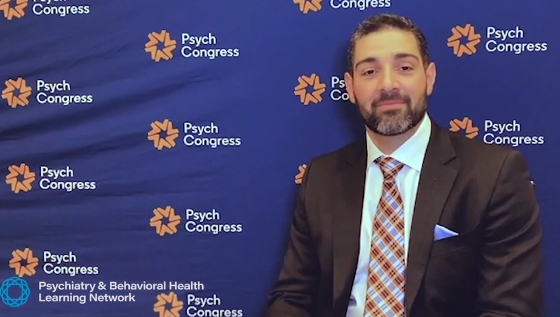 Dr. Edward Kaftarian, MD, a psychiatrist with a private practice and CEO of Orbit Health Telepsychiatry, discusses the challenges associated with setting treatment goals for patients with major depressive disorder. Dr. Kaftarian emphasizes the importance of establishing a clear diagnosis, educating patients and managing their expectations about the medications they are taking.

I'm Dr. Edward Kaftarian. I'm a psychiatrist and CEO of Orbit Health Telepsychiatry, a company that provides telepsychiatry care, high-quality care to patients while having respect for the doctor's work-life balance.

When you're talking to patients about their diagnosis and treatment, you really want to listen as much as possible in the beginning. You don't want to jump to a conclusion of a diagnosis. With mental health, sometimes you need a longitudinal perspective of mental illness in order to make a proper diagnosis. So, the first time that you're talking to a patient, you may not actually know what their diagnosis is. You may have some ideas, a differential, but what you really want to do is understand how their mental illness or their condition is affecting their functioning and what their goals are. Do they want to feel better? Do they want to do better in life? Do they want to function better, relate better with people like their family and coworkers? So, what is their treatment goal? That's going to tell you how you can intervene to provide value to that patient. And as we know, mental conditions oftentimes masquerade as the wrong condition.

For example, somebody comes to you and they're depressed, they might actually have bipolar disorder. So you really want to have a longitudinal view, and continuity is often helpful. So, seeing a patient multiple times gives you a better idea of what their diagnosis may be. Oftentimes, patients have certain symptoms that are more important for them. They cause more suffering. For example, a lot of patients think that insomnia is really the most important condition to treat. So in that situation, you may want to prescribe a sedating antidepressant or some sort of sedating medication, psychotropic medication. For other people, weight gain might be a really important side effect, so you wouldn't necessarily want to prescribe a medication that causes weight gain. So, it's really what the patient tells you is their most important symptom that you want to first focus on. But then, you want to also think about the fact that the patient might not know how their condition is presenting to the public and to important areas in their life. They might not have the insight to know that certain symptoms are really the ones that need to be treated.

So you want to have that balance of understanding what that patient is most concerned about, but also what symptom, or symptom clusters, cause the most dysfunction in that patient's life. Another thing to think about is that certain symptoms can have more or less importance based on the life situation. One example is, we're entering the summertime and the patient wants to lose weight, so you want to start thinking about the medications and how they're affecting the patient's goals. Another situation could be that the patient has taken on a job that requires them to wake up early in the morning. And so, in that condition, the patient needs to get their sleep. So, as you can see, the symptoms take on more or less importance depending on what the patient is going through in their life.

When a patient comes to you for help, they often have expectations that are different than reality. They may think that all it takes is 1 medication. After a couple weeks, they'll feel better. And, as we know, that's often not the case. And so, you want to manage the expectations by having an honest conversation, a transparent conversation of what you think is going on with this patient, as far as their diagnosis and how you think the treatment will go. Now, we know that their treatment is oftentimes an up-and-down thing where you might have some remission, but then you have a relapse, and you want to build that into the expectation. Because if you don't, the patient will become hopeless. They'll think that, "Oh, here we go again. I guess the medication didn't work." But what you want to make sure they understand is that they themselves may not even see the improvement that they have. And that happens a lot, where you and the patient's family, and the people that are in the patient's lives, may see that the patient's doing a lot better, but the patient doesn't see that.

It's sort of like when you are exercising and working out. You're looking at yourself every day in the mirror, and oftentimes, you don't see the progress that you're making, and it takes somebody else who hasn't seen you for a while to point out, "Hey, you're doing much better." So, you want to have that conversation up front, and then remind them later about the specific ways that they've improved, because everybody wants hope. Everybody wants to be feeling like there's progress. When you're making progress, you feel so much better, even if you're not quite where you need to be. But if you feel like you're making no progress, even if you are, then it makes the patient feel hopeless, and then they may be more likely to stop their medication.

Another thing to remember is that sometimes when patients are doing better, they decide to stop taking their medication, and so you want to have that conversation up front to say that many people stop their medication and then relapse, or they get worse. They go into remission. The remission ends, and they go back into another episode of depression or psychosis, or whatever condition that they may have. So you want to create a habit for the patient to take their medication every day. And then maybe in a year or 2, if there's been consistent remission of symptoms and the patient wants to make a change, then at that point, you carefully have a discussion about what they can expect. And you have to monitor them, or it's probably a good idea to monitor them a little bit more closely if you're taking them off the medications.